Originally released in September, 1975, Wish You Were Here was the widely anticipated follow-up album to the monster seller, Dark Side of the Moon. The album was a hit, and spawned renewed interest in long-gone bandmember Syd Barrett, to whom the album was a thinly veiled tribute. The song, Shine on, You Crazy Diamond was clearly directed at Syd, while other tracks on the album were aimed at the music industry itself. 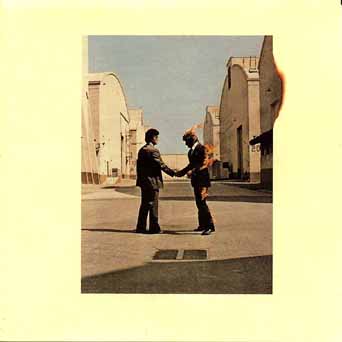 A most unusual feature of this album is that it featured a guest vocal on the track Have a Cigar, sung by Roy Harper (of Led Zeppelin’s Hat’s off to (Roy) Harper fame). This is, to date, the only lead vocal on a Pink Floyd record not sung by a member of the band.

Wish You Were Here, like its predecessor, was issued on tape and LP in a four channel quadraphonic mix, which included a bit of additional music at the end of Welcome to the Machine that was not included in the stereo release.

Over the years, the album has been issued in several countries on blue vinyl, but was never, oddly enough, issued on clear vinyl, which many collectors thought would be done, due to the image of a man holding a clear record on the back cover. To date, the only clear vinyl Pink Floyd LP was a very limited pressing of Dark Side of the Moon, issued in France in 1978. A picture disc LP was also available, but only in a box set of Pink Floyd LPs issued in Britain in a limited edition of 1000 copies.

The album was issued as a half speed mastered LP by Columbia in 1981, and was later issued in a limited edition as a gold compact disc.