Originally released in March, 1973, Dark Side of the Moon remains Pink Floyd’s best selling album* and is almost certainly the band’s best-known work. Despite spending only one week at number one, the album spent 591 consecutive weeks on Billboard’s Top 200 chart, and as this is written, is still the 337th best-selling audio CD at Amazon.com. Pretty remarkable for an album that was released more than thirty years ago! 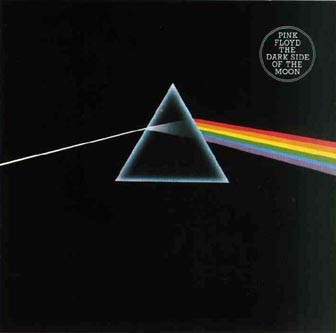 The album featured a hit single, Money, which reached #14 on the American charts and was one of only three Pink Floyd albums to also be released in a four channel quadraphonic mix. A newly-remastered CD version, issued in 2003, was remixed for 5.1 channel surround sound.

The album was originally issued with two different posters and two different stickers, which were frequently affixed to high school notebooks in the 1970’s. The band also wanted to release the album in a box, rather than a gatefold cover, but this idea was scrapped for financial reasons.

Over the years, the album has been issued on white vinyl, blue vinyl, clear vinyl, and pink vinyl, in addition to the traditional black. The black vinyl used in Mobile Fidelity’s half-speed mastered version was translucent.

It is estimated that the band played Dark Side of the Moon live nearly 400 times during the 1970’s. They later played the album in its entirety during the 1994-1995 tour, as well.

The artwork for the album cover, as with all Pink Floyd album covers, was designed by Storm Thorgerson of the design firm Hipgnosis.

*The Wall has sold fewer units, but has been credited with higher sales due to the industry practice of counting sales of double albums as two units.